A camera-trap survey has photographed fishing cats in Peam Krasop Wildlife Sanctuary southwest Cambodia – one of only two locations in the country where the species has been recorded since 2003. 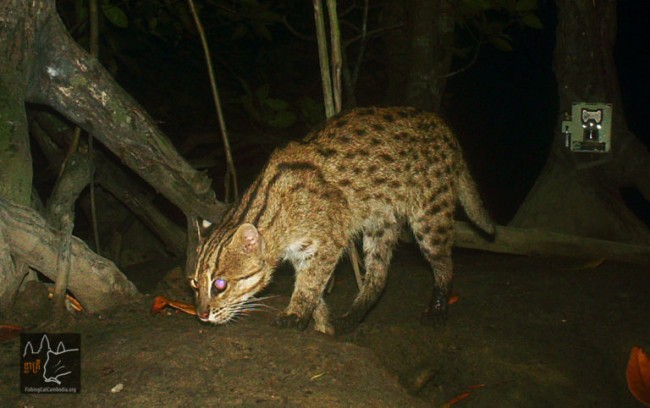 One researcher spotted a young fishing cat in the sanctuary in broad daylight suggesting the population may not be under heavy pressure. Globally the cat’s numbers have plummeted by over 30 percent in the last 15 years putting the species at high risk of extinction. Research on the fishing cat began only in 2009 but it is already believed to be extinct in Vietnam; meanwhile there are no confirmed records in Laos PDR and scarce information from Myanmar Thailand and Cambodia.

Clinging on to rapidly disappearing Asian wetlands the fishing cat (Prionailurus viverrinus) is at high risk of extinction. The cat is believed extinct in Vietnam; meanwhile there are no confirmed records in Laos PDR and scarce information from Myanmar Thailand and Cambodia. A recent extensive survey for fishing cats on Java came up empty-handed prompting fears that the species is slinking out of existence in Southeast Asia. But things in the region may be looking up for the water-loving medium-sized wild feline. A survey has confirmed that a population survives in southwest Cambodia’s Peam Krasop Wildlife Sanctuary (PKWS) — one of only two locations in Cambodia where the fishing cat has been recorded since 2003. Last February researchers from the Kla Trey | Cambodian Fishing Cat Project placed over 30 camera traps in key mangrove habitat as part of the region’s first conservation project dedicated to the species.

The results provide the first images of fishing cats in Cambodia since a brief survey in 2015 turned up the first evidence of the species in over a decade: three fishing cats at two coastal sites with no previous records. Two of those individuals were in PKWS and were later identified as a male and a female.

Camera traps have recently revealed that these two cats are still present with the female “showing us a fascinating display of the intimate life of fishing cats in the wild possibly in response to marks left by the male ” Herranz Muñoz said.

“The recapture of the fishing cats after two years is good news ” Dr. Jan F. Kamler Southeast Asia Leopard Program Coordinator for global wild cat conservation organization Panthera said via email “as it indicates that snaring could not have been high in that area.” A new individual yet to be identified was also photographed slinking over mangrove roots in the distance highlighting the scarcity of dry land in this frequently inundated habitat. In a recorded first for Cambodia researcher Sarady Moul spotted a fishing cat in broad daylight while en route to check camera-traps along a narrow channel. “I was so surprised that I almost jumped out of the boat ” he said. “At around 8:45am I saw it peering out of the mangrove roots – I never expected to see one at that time.” Scrambling to take a photo Moul asked the boat driver to move closer prompting the cat to turn tail and vanish into the mangroves. “Seeing a fishing cat in the wild was incredible ” Moul said of the experience. “My hypothesis is that the young cat may have been looking for a site to swim across the channel and disperse to other islets ” Herranz Muñoz added. “Fishing cats are known to be nocturnal – seeing the individual in the morning may be explained by the tide being at its lowest point at that time making the shore accessible.” Moul deployed a camera-trap as close to the site as possible. “We are hugely excited by the prospect of our camera-traps capturing a fishing cat swimming in the wild ” Herranz Muñoz said. This would be a global first for fishing cat research. At 100 meters across the channel is one of the narrowest in the area and carries a lot of boat traffic. “Sightings like this are very rare and would be highly unlikely if the population were under heavy pressure ” Herranz Muñoz noted.

In the past fishing cats in the region have not been so lucky. Back in 2014 in an interview with Mongabay on Southeast Asia’s smaller cats experts from the International Union for Conservation of Nature’s (IUCN) Cat Specialist Group declared the fishing cat in need of immediate research and attention due to its “rarity and levels of threat faced.” According to the IUCN Red List assessment the cat’s numbers globally have declined by over 30 percent in the last 15 years but nowhere is the rate more alarming than in Southeast Asia where the greatest threat to the cat’s survival is human persecution. In 2015 killings of fishing cats in PKWS in retaliation for damaging fishers’ nets was identified as a major threat to the population but fishers’ focus has now shifted to crabs and “people have no will to hunt or kill fishing cats because there is no perceived conflict ” Community Officer Sothearan Thi said after recent interviews with villagers. Communities report that hunting in the area is infrequent thus fishing cats in PKWS may be relatively safe from the snaring crisis that is sweeping Asian forests according to a group of scientists writing recently in Science. Panthera’s Kamler describes snares as “a major issue for most wildlife in Cambodia and other areas of Southeast Asia.” What’s more villagers welcome measures to mitigate future human-fishing cat conflict. Herranz Muñoz sees this as a very positive sign and is hopeful that “together we can ensure that fishing cats persist in the Cambodian mangroves.” In order to further reduce threats to the population Kla Trey has teamed up with the country’s leading organization for direct protection of threatened habitat and species Wildlife Alliance. In February their mobile environmental education unit conducted awareness raising workshops alongside Kla Trey staff. The two organizations will work closely to promote the “importance of coastal zone conservation in the Cardamom Landscape — something for which the fishing cat is an important flagship ” Dr. Thomas Gray director of science and global development for Wildlife Alliance told Cambodian press in January. He and Herranz Muñoz have since provided training to rangers in neighboring Botum Sakor National Park on camera-trapping fishing cats to further research their distribution within the Cardamom Landscape.